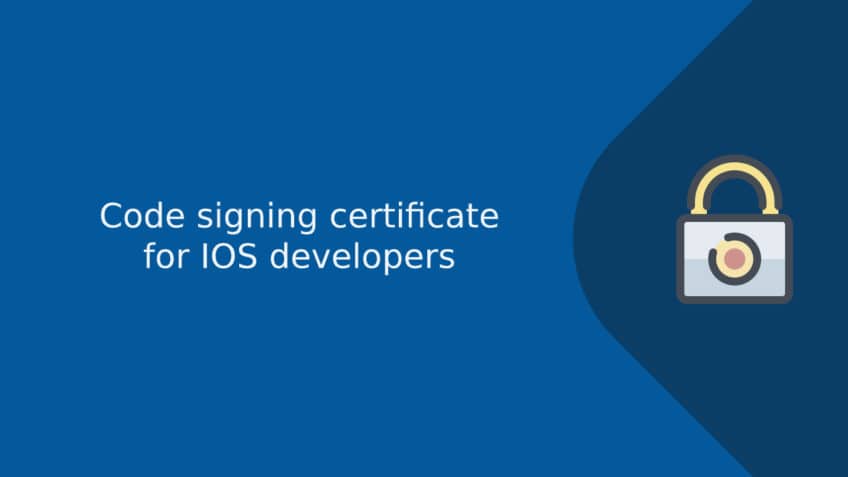 Access to the internet is not a major concern nowadays. Most of us use the internet from our mobiles, PC’s, tablets and laptops. Using the internet from mobiles and other portable devices has definitely increased flexibility and also developed an easy way to get information wherever and whatever required.

We also download the contents, information, images and pictures from various sites and applications wherever we want. But with greater flexibility, comes the greater concern of security and frauds. Everyday we come across various cases of cyberattacks, malwares, various viruses that are developed by hackers for data-stealing or whatever the purpose. One recently happened example is the ransomware attack.

In this article we will be able to know:-

1. What code signing certificate actually is? Why is it necessary for IOS developers?

2. What privileges does it provide?

3. What elements code signing certificate for IOS developers include?

4. How can IOS developers get access to the certificate?

5. Why IOS developers require a code signing certificate the most?

6. What is a code signing certificate?

The code signing certificate is a digital certificate that is required in OS X.it It consists of a security key and essential private quality. This private essential quality helps an IOS app developer to certify his/her app by any recognized certificate vendor.

Why is code signing certificate necessary for IOS developers?

Also, the main thing it ensues is the authentication. Authentication means it helps in verifying the identity. The identity in today’s world is an issue of concern. So, important work of confirming the identity and maintaining the trust of the customer is done by the code signing certificate.

Generally, Apple devices owners are not able to access the unauthorized programs in their IOS system because it is extremely sensitive in detecting the alliance with the known certificate providers like Thawte Code Signing Certificate.

What privileges does it provide?

– Now, if the user has an option whether to download an application on his IOS system which has a certificate signed by a known organization or an ordinary app, which app will you prefer? Definitely the app having the certificate. So, it increases the number of downloads for the company and also maintains the trust relations with the clients along with maintaining the reputation of the company.

– More additionally, it helps in determining whether the changes in the source code is made either accidentally or intentionally. This helps in the protection of the data.

– Code signing certificate does it work even without having the knowledge of the malware attack. Signing the certificate provides the privileges of updating the applications by both the developers and consumers as the system is familiar with the digital signature and has the authentication.

It is also beneficial

– as it also provides a secure network and also generates the secured environment. Also Apple issues this certification process to protect the right of the developer as the authorized owner of the software.

– Seal – Seal is an important element of code signature. It consists of crucial factors such as code, information, identifier, associated files and more. Any alterations made in the code is detected by the seal.

– Unique identifier- the identification of the code is obtained from the developer. It is the category in which the code falls. It is necessary to categorize the code as it can be anything and to check the alterations, it should be known by the developer that in which category does the code belong.

How to get access to the code signing certificate?

The steps for the certification process are as follows:-

2. The satisfaction of authentication and identity validation- this process helps you to prove the customer that the app he is purchasing is from the authorized and trusted supplier. It helps in providing the financial, no-financial documents and also the forms of identification.

3. Installation of the signing certificate- depending on you are a Mac user or a windows user, you need to install the certificate on your keystone or keychain after the verification process is complete.

4. Sign your code-you can use the code signing certificate and enjoy using it till the validity period ( which is generally for four years ).but signatures which you have signed remain valid also after the validity is complete.

But you need to sign the certificate by reading and agreeing to all the terms and conditions in the certificate. There are many technical clauses that are mentioned and should be accepted by you for the code to be accepted for certification. Also, there are various equipment on the operating system such as internal requirements, designed requirements etc. which decides whether to run the code or not.

So, along with the code signing certificate comes many privileges which are essential for maintaining the trust relations as well as the good relations with the costumers. It also benefits the company or application developers with the increase in a number of downloads. So, its pretty cool to have the code signing certificates as it brings many perks along with it or rather it has become the need of the technical world nowadays.

Why it becomes important for IOS developers to have a code signing certificate?

For people using apple mobiles or laptops else the Mac, it becomes more and more essential to possess the code sign as the IOS system is designed in such a way that it detects the digital signature before opening the content. As the systems like IOS are not familiar with the device operating system so, the self -signed certificate doesn’t acquire any value. So, it becomes necessary to have the certificate signed from an appropriate vendor who has an alliance with the IOS system.