What is the ECC SSL certificate? Why Choose ECC Over RSA 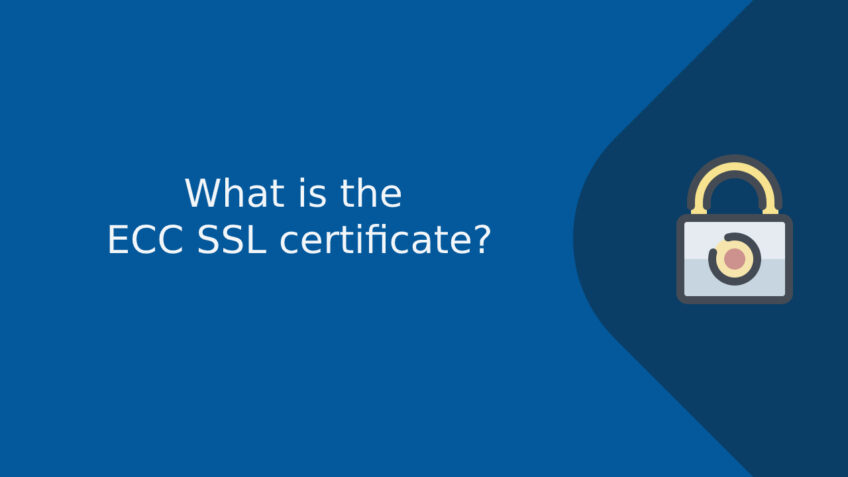 What is the ECC SSL certificate? And how to get it.

There are about billion of websites currently on the internet. And every second this number keeps rising. And search engine giants like Google, Bing are making it easier for everyone to search for any topics.

Therefore the search engines are en

couraging the website owners and web developers to increase the security of the sites.

And the search engine will also tell the people your site is secure. But nowadays those secure sites are also getting hacked.

But you will tell me I just say those sites are secure, Yes those are but the hackers are getting pretty creative with hacking the sites.

But now we have a new technique to make our site way more secure than it was before.

Let’s see what that technique.

To understand the technique lets first understand what cryptography is.

Cryptography is a technique in which original data is hidden or converted to some other form to protect it from stealing. In cryptography, we encrypt the data before sending and it gets decrypted after it is received by the receiver.

So here in the Elliptic Curve Cryptography algorithm is used to hide the data and data is encrypted with mathematical function to make it more secure.

It used the Elliptic Curve function to encrypt the data.

Now the question you might be having is if we are not using ECC techniques what techniques we are using right now.

At present most of the sites are using RSA techniques for encryption.

What are RSA techniques?

RSA techniques are named after its creator Rivest, Shamir, Adleman. It is well-known techniques which are also considered by many people as the most secure technique there is.

RSA is a public-key encryption technique. In this technique, there are two keys. The public key and the private key.

In general public key is available to everyone hence the name public but the private is only with the receiver so that receiver can use his private to decrypt the data.

So whenever a data is sent with the RSA algorithm it first gets encrypted by users’ public key which is available to everyone but when the user receives the data it can only be decrypted by its private key which is mostly installed on the user’s device.

Here we have to remember one thing both techniques use the asymmetric encryption which is one key for encryption the data and one key for decrypting the data.

Now here are the reasons for choosing ECC over RSA.

Say you send the data through the website which is using the RSA algorithm for their SSL certificate. Then data send to the server with encryption requires more size of the key in terms of bits.

But if the same site is using the ECC algorithm then it will require less bit size for the key.

Mathematically function used in the ECC algorithm is next o impossible to crack by the hacker. So even if data gets grab by the middle man he cannot be able to see what in the data which in turn makes the data impossible to later.

Less size of the certificate

Due to the less key size the size of the SSL certificate having an ECC algorithm reduce greatly in comparison to SL certificate with the RSA algorithm. So when your certificate site is less it can retrieve easily by the server.

Speed of site is an increase

I know you must be thinking how can Elliptic Curve Cryptography be less expensive than RSA if it has so many features? So let me tell you one thing here less expensive means for RSA we required more resources but ECC can manage with fewer resources also.

Now the most important question how to get ECC on your SSL certificate?

You can just upgrade your existing SSL certificate also with the Elliptic Curve Cryptography algorithm.

And if you want to ahead of the crowd you must implement this technique on your website to make it more secure and give a better experience to your users.